A brief background of my role in the development of an electrically powered all-terrain wheelchair concept, prototype and eventually commercially available product.

I’ve been a quadriplegic wheelchair user for over 25 years. From the first day I got my electrically powered wheelchair stuck in a muddy path at the rehab centre I knew there had to be an off-road mobility solution out there. Finding “the best” way to get back into the countryside was, and has continued to be a focus for my energy. Over the years I’ve tried all manner of machines from the Woodstar ATC, downhill wheelchairs, modified quad bikes and even amphibious buggies.

Every solution is a trade-off between capability, transportability, range, weight & size, access, the ability of the intended user and relevant rules and regulations. An online survey of wheelchair users interested in accessing the countryside in 2003 provided a design specification for a lightweight, electrically powered mobility device. The prototype featured independent rear wheel motors, trailing arm rear suspension and independent front suspension arranged on a T shape tube chassis to give easy ingress and egress from a wheelchair.

I was lucky enough to work with two friends on subsequent redesign and production of a second and third prototype using a folded aluminium chassis, rather than tube frame. These preproduction chairs had enhanced features such as a seat frame that could be lifted to improve access, and a modular construction allowing the frame to split and wheels be removed for transport in the boot of a car.

With all-important support from friends and family and business angel investment we were able to commercialise our all-terrain wheelchair concept as the Boma from 2006 until 2016.

The Boma has changed greatly over the years, but has continued to thrive under its new ownership with Equal Adventure. Contact them for more information. 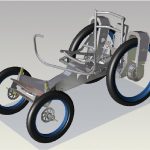 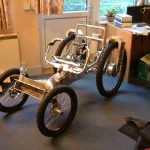 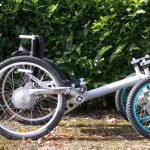 The first physical prototype of an electrically powered all-terrain wheelchair.